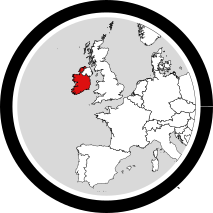 The Island of Ireland refers to the Republic of Ireland: twenty-six counties with a population of over five million organised as the Parliamentary Democratic Republic through a PR-STV electoral system with membership in the European Union since 1973, and Northern Ireland: six counties with a population of 1.9 million organised a consociational power-sharing democracy in the Northern Ireland assembly with PR-STV electoral system.

The Island of Ireland refers to the Republic of Ireland: twenty-six counties with a population of over five million organised as a Parliamentary Democratic Republic through a PR-STV electoral system with membership of the European Union since 1973, and Northern Ireland: six counties with population of 1.9 million organised a consociational power-sharing democracy in the Northern Ireland assembly with PR-STV electoral system. Although Northern Ireland voted to remain in the EU, the economic and political fallout of the 2016 Brexit vote continues to shape the affairs of the region. Census results due out this year (2022) for Northern Ireland could trigger a referendum process on the reunification of Ireland, divided since 1922 as part of the Anglo-Irish treaty, one of the decisions that triggered the 1922-23 Irish civil war. Both regions are undergoing interesting transformations as new social and political cleavages emerge. Social movements wins for left-wing and human rights based campaigns set the stage for the strong left wing vote at the General Election 2020 (GE2020) demanding action for the longstanding health and housing crisis in the Irish State. GE2020 was a historic result for region whose majority has only ever voted conservatively. This leftwing block is still mobilised and giving preference to Sinn Féin.

Since 2019 official data on terrorism across UK including Northern Ireland (NI) doesn’t record ideological distinctions in terrorist activity which makes it impossible for civil society groups to understand the extent to which the far-right in NI are a threat. The 2021 Crown report on Terrorism Acts in 2019 (Hall QC), records the current terrorism threat level in Northern Ireland remains at severe, that the threat is more likely to emerge from organisations than lone individuals and the possibility of terrorist groups confined to Great Britain such as the extreme right migrating to Northern Ireland. Hall calls for transparency in official recording of terrorism, “The investigation and prosecution of terrorism looks and feels very different in Northern Ireland from the rest of the United Kingdom” (p6) and notes the absence of coherent explanation for Dissident Republicans to be dealt with as terrorists while Loyalist Groups are dealt with as paramilitaries (p 181).

In 2020 the PSNI reported a decline in sectarian incidents and one of the highest figures for racist hate crimes and incidents in Northern Ireland since police records began in 2004 (936 racist incidents and 626 racist crimes) despite the relatively small number of people from ethnic minority backgrounds in NI. Homophobic hate crimes remain high in while hate targeted at trans people and people with disability has increased. Some of the hate incidents in recent years that have had involvement of far-right include the targeting of Roma communities by some Loyalists with C18 involvement, Jim Dowson involvement in Belfast Flag protests 2012 onwards, 2018 KKK costume gang targeting of an Islamic centre in Newtownards, 2021 arson attack on Belfast Multicultural centre and targeting of people seeking asylum in Carrickfergus.

Although the 2021 ESOH report for Ireland states, “There have been no far-right terrorism convictions in Ireland during this period”, there has been a significant escalation in militant tactics by far-right actors in recent years including arson attacks, physical assaults, death threats and harassment and doxing of antiracists. Online calls for violence by far-right actors targeting Jewish people and other groups, were hosted by Facebook throughout 2021, until the platform was forced to remove these posts by sustained public and political pressure. Commissioner of An Garda Síochana, Drew Harris publicly acknowledged the involvement of the far-right at anti lockdown riots in 2021 and the National Surveillance Unit has been tasked with monitoring these groups.

Up to 30 far-right candidates ran in Ireland’s GE2020 polling less than 1% in most constituencies. This failure to breakthrough electorally should not be taken to mean the far right are unable to extend their reach at a grassroots level. Hate group, the National Party (NP), founded by Youth Defence militants with longstanding connections to international fascists, is the most significant threat to community life in Ireland currently. Many NP members have criminal convictions for violence, continuously target women and minority groups and have steadily increased their doorstep engagement pushing their white nationalist agenda, after retreating from the streets in October 2020. Although attendance at their Ard Fheis (annual conference) decreased from approximately 100 in 2019 to 60 in 2021, their social media followership (local and international) continues to increase.

Members of both the National Party (Justin Barrett, Philip Dwyer, Patrick Quinlan) and the Irish Freedom Party (Hermann Kelly, Dolores Cahill who was asked to leave IFP in March 2021) have attempted to exploit the Covid pandemic pivoting between conspiracy and anti-lockdown content, in response to changing public attitudes and government messaging. The most significant figures with international connections on the far-right in Ireland are Justin Barrett, Hermann Kelly, Dolores Cahill, Niall McConnell, Rowan Croft, Keith Woods. Irish Senator Ronan Mullen continues to appear at international gatherings bringing the religious right into closer alliances with far-right actors. Far-right media projects Gript and The Burkean also do their bit to position Irish actors in the international far-right ecosystem, amplifying narrative and profiles across many platforms.

Following the Irish revolutionary period of 1916-1923, the social, political and economic affairs of the 26 counties were directed by a church-state corporatist relationship supported in the most part by the pro-treaty side of the Irish civil war. Opposition to the treaty and the partition of Northern Ireland tended to be strongest among Irish Republicans who shared socialist, internationalist and antifascist values. The tendency of some Northern Ireland Unionists and Loyalists towards British fascism entrenched these positions to a degree, however, dedicated community and trade union organising in both regions has often succeeded in revealing common cause among communities who bear the brunt of the political and economic decisions of the elite.

Anti Fascist Action (AFA) magazine ‘Fighting Talk’ report a history of mutual support between paramilitary unionism (UDA/UVF) and international far-right organisations (National Front, VMO, C18) in Northern Ireland since 1970’s. These connections have appeared mostly dormant since the ’98 Good Friday Agreement brought an end to three decades of armed conflict sparked by the British State’s violent repression of the Northern Ireland Civil Rights Movement. In his 2012 memoir of his time in the National Front and BNP, Matthew Collins characterises the relationship between British far-right groups National Front, BNP and C18 and some Loyalists and Unionists in Northern Ireland to be “largely instrumental, not institutional”. British far-right groups have long seen Northern Ireland as a breeding ground for their hate but have failed to establish a long-term base in the region due to their inability to understand the distinct histories, cultures, social groups and experiences that characterise the region. Trademark Belfast point out that the DUP, UUP, PUP, TUV have occasionally occupied that space that a populist or far-right party would fill (2014). As noted above, we wait for the Northern Ireland 2021 census result, which could indicate demographic shifts triggering a referendum on reunification between Northern Ireland and Ireland. This context is changeful and potentially volatile. On the one hand, new social and political cleavages are emerging, evident in changing voting patterns and the rise of new social movements particularly feminist and LGBTQ, while a darker development sees racism overtaking sectarianism in recordings of hate crime since 2015.

Besides the occasional emergence and quashing of fascist subcultures, the consistent base of the far-right in the Republic of Ireland has been the defenders of the social and economic policies of the Catholic corporatist state. Founders and members of the militant anti-choice organisation Youth Defence (YD) have disseminated anti-Semitic, racist, misogynistic propaganda since the late 80’s. YD have established and facilitated relationships across international far right actors and currently seek electoral breakthrough for their white-Nationalist political project, the National Party.

Since 2016, internationally supported far-right organising in Ireland has intensified. International organisers from PEGIDA, Identitarian, white nationalist and militant anti-choice groups have all spent time in Ireland touring and attempting to speak at public events. Experienced antifascist organisers continue to work well with civil society and community groups denying public space to the far right. While the consequences of the June ‘16 Brexit vote outcome and November ’16 US election of Trump seemed to raise the expectations of far-right groups globally, in Ireland, left-wing and rights-based movement wins dominated the news and public mood. Historically socially conservative, centre-right parties Fine Gael and Fianna Fáil, who have held governing power since establishment of the Irish State, kept a keen eye on emerging social and political cleavages and shifted to support the socially progressive vote of the 2015 Marriage Equality and 2018 Abortion referendums leaving open a block of socially authoritarian voters (30%) with no political representation. Far-right groups, believing they had claim to these voters, ran up to 30 candidates in GE2020 but, as noted above, this block did not appear.

The EPF 2021 report on Religious Extremist funders tracked funding from the US and Russia (2012-2016) to the Iona Institute, Ireland. But as the title of the report goes, this is only the tip of the iceberg. Since the 1980’s Youth Defence militants have maintained international relationships alleged to have financially supported the activities of YD members, relationships that continue to evade the reach of the Standards In Public Office Commission (SIPO). In recent years, new crowdfunding technologies have served to bypass the increasingly regulated arena of charity and political donations, now watched carefully by SIPO. Sites such as GoFundMe, Paypal, Kofi, BuyMeACoffee have been used to channel thousands in donations to far-right actors in Ireland. For example, coordinated donations totalling over 6000 euro to Keith Woods were made over a period of days January 2022 on buymeacoffee.com.